Interesting Study - Can Having A Dog Or Cat Help Ward Off Obesity And Allergies In Infants? 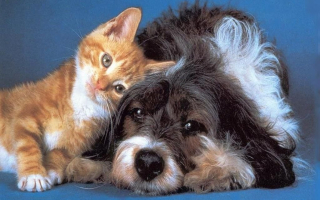 The Business Standard recently published this article. Personally I have always felt that by having pets as a child, I was "better off" for even more reasons than this study. I feel that by just teaching children to help take care of another living being, it helps them respect animals and humans even more. I think this study is interesting and at the end it talks about a "dog pill." While I don't agree with that, I do agree that having a dog, cat or any other pet enriches our lives as both children and adults.

You may want to gift a dog to your baby as a recent study has suggested that a pet early in life may alter gut bacteria in immune-boosting ways.

The University of Alberta study showed that babies from families with pets--70 per cent of which were dogs--showed higher levels of two types of microbes associated with lower risks of allergic disease and obesity.

But don't rush out to adopt a furry friend just yet.

"There's definitely a critical window of time when gut immunity and microbes co-develop, and when disruptions to the process result in changes to gut immunity," said pediatric epidemiologist Anita Kozyrskyj.

The latest findings from Kozyrskyj and her team's work on fecal samples collected from infants registered in the Canadian Healthy Infant Longitudinal Development study build on two decades of research that show children who grow up with dogs have lower rates of asthma.

The theory is that exposure to dirt and bacteria early in life--for example, in a dog's fur and on its paws--can create early immunity, though researchers aren't sure whether the effect occurs from bacteria on the furry friends or from human transfer by touching the pets, said Kozyrskyj.

Her team of 12, including study co-author and U of A post-doctoral fellow Hein Min Tun, take the science one step closer to understanding the connection by identifying that exposure to pets in the womb or up to three months after birth increases the abundance of two bacteria, Ruminococcus and Oscillospira, which have been linked with reduced childhood allergies and obesity, respectively.

"The abundance of these two bacteria were increased twofold when there was a pet in the house," said Kozyrskyj, adding that the pet exposure was shown to affect the gut microbiome indirectly--from dog to mother to unborn baby--during pregnancy as well as during the first three months of the baby's life. In other words, even if the dog had been given away for adoption just before the woman gave birth, the healthy microbiome exchange could still take place.

The study also showed that the immunity-boosting exchange occurred even in three birth scenarios known for reducing immunity, as shown in Kozyrskyj's previous work: C-section versus vaginal delivery, antibiotics during birth and lack of breastfeeding.

The study suggested that the presence of pets in the house reduced the likelihood of the transmission of vaginal GBS (group B Strep) during birth, which causes pneumonia in newborns and is prevented by giving mothers antibiotics during delivery.

It's far too early to predict how this finding will play out in the future, but Kozyrskyj doesn't rule out the concept of a "dog in a pill" as a preventive tool for allergies and obesity.

"It's not far-fetched that the pharmaceutical industry will try to create a supplement of these microbiomes, much like was done with probiotics," she said.

The study appears in the journal Microbiome.

I belief that a dog or a cat have risks of allergic disease and obesity.