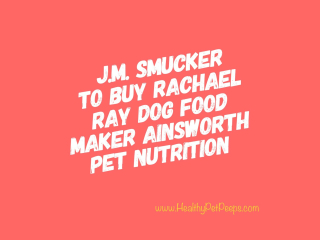 J. M. Smucker Co said on Wednesday it would buy Rachael Ray Dog food maker Ainsworth Pet Nutrition for about $1.9 billion in cash to strengthen its pet food portfolio, and was exploring options for its U.S. baking business, including a sale. This comes out to approximately US$1.7 billion, after an estimated tax benefit of US$200 million. The transaction, announced April 4, is expected to close early in Smucker's fiscal year beginning May 1, 2018.

Smucker’s deal is the latest in a string of acquisitions of pet food companies by traditional processed food makers and comes on the heels of General Mills Inc’s purchase of high-end pet food maker Blue Buffalo Pet Products Inc for about $8 billion.

Mars, Cargill and Nestle have also added pet food companies to their portfolio, fighting for a share of the fast-growing $30 billion U.S. pet food market.

U.S. retail pet food sales rose over three times as fast as the 1.2 percent growth in sales of packaged foods last year, according to research firm Euromonitor.
"After five generations, our family, in partnership with L Catterton, made the decision to sell Ainsworth Pet Nutrition to The J. M. Smucker Company," said Sean Lang, Executive Chairman of Ainsworth, in a press release.
Ainsworth's partnership with Rachael Ray brought celebrity appeal. The privately owned company, which was founded in 1933 as Dad's Pet Care, has virtually doubled sales in the last decade. Rachael Ray's Nutrish brand accounts for about two-thirds to three-quarters of the company's revenue, which is dominated by products for dogs. WalMarts brand, Pure Balance, is also produced by Ainsworth.  The acquisition of Nutrish will significantly expand the Smucker's presence in the premium dry dog food segment within the grocery and mass channels, complementing Smucker's Nature's Recipe brand.