5 Meds That Are Toxic To Pets 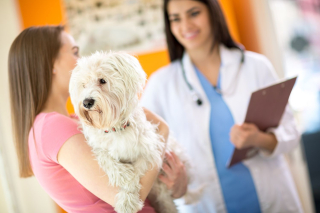 Most people know that chocolate and grapes can be toxic for pets, but potential threats can lurk elsewhere in your home. Prescription and over-the-counter medications are among the top reasons people call into poison control hotlines for both kids and pets, and with good reason. Here are the top five medications of concern when it comes to pets and toxicity:

1. Ibuprofen. As the active ingredient in common over-the-counter products such as Advil and Motrin, ibuprofen is unfortunately ingested by pets both accidentally and intentionally by owners unaware of its potential side effects. Cats are particularly sensitive to its effects. The most common clinical sign is vomiting or gastrointestinal ulcers, though it can also lead to kidney damage. Other NSAIDS such as Aleve can also be problematic.

2. Acetaminophen. Speaking of pain medications, acetaminophen-containing products such as Tylenol are also high on the list of pet poisons. Like ibuprofen, cats are particularly sensitive to the effects of this medication, and one pill is enough to kill a cat. Both cats and dogs can experience liver damage as a result of this medication, starting with decreased appetite and leading to yellow skin (a sign of jaundice), swollen paws or difficulty breathing. Acetaminophen is a common ingredient in combination products like cough and flu remedies, so be careful to read the label on your products! 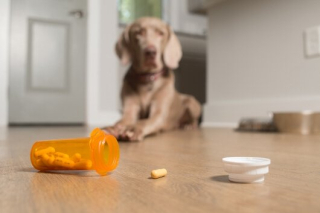 3. Stimulants. ADHD medications such as Adderall and Ritalin can be toxic to companion animals. Sadly, they are more likely to be ingested by pets as they are often prescribed for children who may be less vigilant about keeping the pills out of the reach of the household dogs and cats. Signs of ingestion may include dilated pupils, seizures, shaking or hyperactivity.

4. Antidepressants. Antidepressants fall into several categories depending on their mechanism of action. In the most commonly prescribed medications (such as Prozac, Paxil, Zoloft and Effexor) work by increasing the concentration of neurotransmitters in the brain. When overdosed, the brain can be flooded with these chemicals and pets can experience a variety of symptoms such as depression, hyperexcitability, seizures and vomiting.

5. Vitamin D. As doctors are starting to diagnose Vitamin D deficiency more often, this is a common supplement in people’s medicine cabinets. When there is too much in the body, blood calcium levels also rise, resulting in serious damage to the kidneys. It is so effective at causing damage that it's commonly used in rat poisons such as d-Con. Vitamin D might appear on rodenticide labels as “cholecalciferol,” and should be avoided.

There’s no time like the present to ensure any of these items in your house are safely secured away from prying pet paws. If you suspect your dog or cat has ingested any of these harmful substances, call your veterinarian or a pet poison control helpline ASAP!

Here we are with Dr. V